The Securities and Exchange Commission (SEC) has recently issued an advisory (as seen below) on PRESIDENT: RODRIGO DUTERTE CHARITY FOUNDATION with Bangko Sentral ng Pilipinas “Handog ng Kabuhayan”, warning the public of the individuals and groups involved in text scams. The advisory defines the activities behind the scheme, and advises the public to not to reply if you receive a text message promoting an alleged electronic raffle, which is confirmed to be fake.

This ADVISORY is prompted by information received by the Commission on the proliferation of a TEXT SCAM using the name of the President, telling the recipient has won the amount of Seven Hundred Fifty Thousand Pesos (Php750,000.00) through an electronic raffle, from the PRESIDENT: RODRIGO DUTERTE CHARITY FOUNDATION with Bangko Sentral ng Pilipinas “Handog ng Kabuhayan.”

The recipient is instructed to text his/her name, age, address and work and to immediately call the text sender who usually introduces themselves as a lawyer and allegedly connected with the Bangko Sentral ng Pilipinas. To give a semblance of authenticity, a government approval number, such as one allegedly from the Department of Trade and Industry is quoted in the text message, such as “DTI#0432 Series of 2020.”

Below is a sample of said TEXT SCAM: 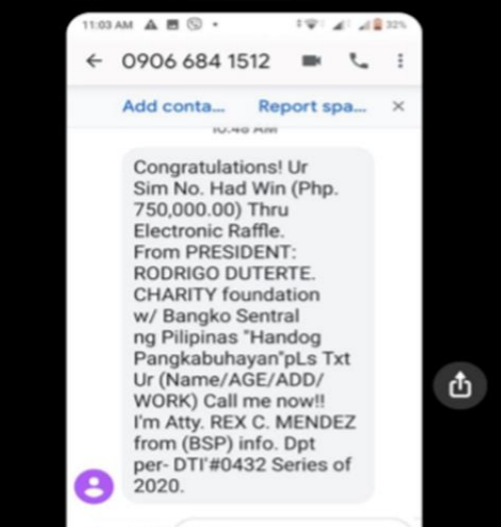 The public is hereby informed that the PRESIDENT: RODRIGO DUTERTE CHARITY FOUNDATION is NOT REGISTERED with the Commission as a Corporation. Further, the Policy and Specialized Supervision Sector of the Bangko Sentral ng Pilipinas has confirmed that the alleged electronic raffle is a fake.

The public is further informed that an Advisory, warning the public on Text Scams, was issued by the Bangko Sentral ng Pilipinas dated May 13, 2015, stating that the BSP does NOT sponsor or engage in any games of chance, raffle or lottery of the nature in said TEXT SCAMS.

In view thereof, the public is hereby advised NOT TO REPLY if you receive a TEXT SCAM such as the one shown above or of a similar nature.

Those who engage in these TEXT SCAMS are warned that aside from facing criminal prosecution for violation of the pertinent provisions of the Revised Penal Code, the Cyber Crime Law and Data Privacy Act, such scams committed during the Covid 19 crisis is punishable under Section 6 (f) of Republic Act No. 11469 which provides:

“Sec. 6. Penalties. – In addition to acts or ommissions already punished
under existing laws, the following offenses shall be punishable with
imprisonment of two (2) months or a fine of not less than Ten thousand pesos
(Php10,000.00) but not more than One million pesos (Php1,000,000.00), or
both, such imprisonment and fine, at the discretion of the court:

Should you receive any TEXT SCAM, you are advised to report the matter to the National Telecommunications Commission (NTC), the National Bureau of Investigation (NBI), the Bangko Sentral ng Pilipinas (for text scams alleging involvement of the BSP), the Department of Trade and Industry (for text scams alleging involvement of the DTI), or this Commission (for TEXT SCAMS alleging to be with the participation of an entity registered with the Commission) by sending a report to the Enforcement and Investor Protection Department at epd@sec.gov.ph.

For the guidance of the public.