The Securities and Exchange Commission (SEC) has recently issued an advisory (as seen below) on The Billion Coin by Kris Kringle, warning the public of the individuals and groups involved in such activities. The advisory defines the activities behind the scheme, and advises the public to not to invest or stop investing in any investment scheme offered by the said entity, its representatives or any entities engaged in schemes which promises ridiculous rates of return with little or no risks.

Based on information gathered by the Commission, the entities operating under name THE BILLION COIN (TBC) by KRIS KRINGLE are engaged in investment-taking activities in the Philippines which are NOT AUTHORIZED by the Commission.

TBC promotes its “TBCoin” as a true and decentralized cryptocurrency that aims to revolutionize the global financial system in order to eradicate world poverty.

Unlike Bitcoin and other cryptocurrencies which strictly follow the marketdriven norms, the value of  TBCoin is said to be user-based because its price apparently increases depending on the number of its users/holders or investors. As such, TBC called it as an “Abundance-based Cryptocurrency.”

Basically, TBC devises its own parameter in generating the value of its TBCoin based on the total number of TBC’s investors multiplied by One Euro (€ 1) which means that if TBC gathered One Billion (1,000,000,000) investors, each TBCoin will be worth One Billion Euros (€ 1,000,000,000.00) correspondingly.

Aside from the foregoing, TBC also offers a number of investment packages in the Philippines ranging from One Hundred Pesos to Twenty-Five Thousand Pesos (Php 100.00–Php 25,000.00) with a return of One Hundred Percent (100%) every Twenty-Five (25) days with additional bonuses and leverages intended to entice its investors to increase their investments and to encourage them to invite more members in order to generate more income. To illustrate: 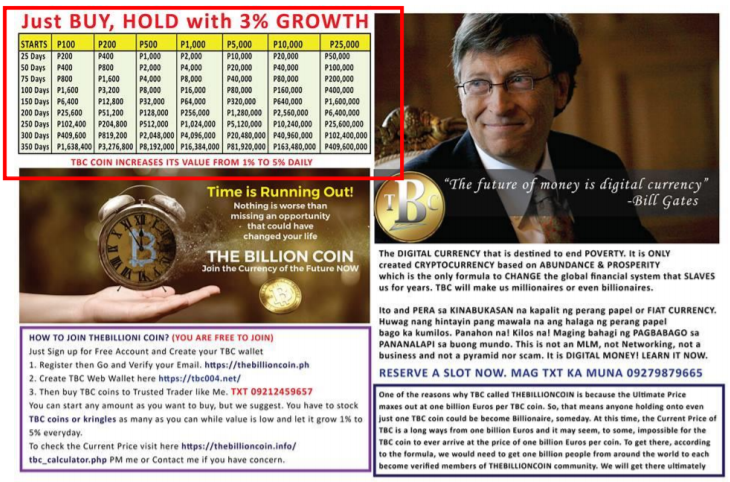 Accordingly, the schemes presented by TBC involves the offering and sale of securities, in the form of investment contracts to the public because it entices them to invest their monies on its TBCoin and other investment packages in lieu of passive income and whether the TBCoin be treated as a cryptocurrency irrespective of its unique characteristics, the SEC ADVISORY on Initial Coin Offerings and Virtual Currency posted 08 January 2018 specified that some virtual currencies, based on the facts and circumstances surrounding their issuance, follow the nature of a security as defined by Section 3.1 of the Securities Regulation Code (SRC).

Hence, Section 8 of the same Code requires that the said offer and sale of such securities must be duly registered with the Commission and the concerned corporation and/or its agents must have appropriate registration and/or license to sell such securities to the public.

However, per record of the Commission, TBC and its operator, KRIS KRINGLE are NOT REGISTERED as a corporation or partnership with the Commission and have NO SECONDARY LICENSE to solicit, accept or take investments/placements from the public nor to issue investment contracts and other forms of securities defined under Section 3 of the Securities Regulation Code (SRC).

Likewise, the names THE BILLION COIN and KRIS KRINGLE DO NOT APPEAR among the registered banks, exchanges or companies engaged in digital assets with the Bangko Sentral ng Pilipinas (BSP) in accordance with the GUIDELINES FOR VIRTUAL CURRENCY EXCHANGES (BSP CIRCULAR NO. 944) which requires all entities engaged in Virtual Currencies in the Philippines to obtain a Certificate of Registration to operate as remittance and transfer company pursuant to the BSP rules and regulations.

Moreover, the TBCoin is NOT INCLUDED among the list of the generally accepted virtual currencies as posted on the World Coin Index and Coin Market Cap websites despite TBC’s assertion that it is at par with the other leading cryptocurrencies in the market.

Worst, it appears that no open exchanges allow the trading of TBCoins so TBC seemingly manages its own digital exchange platform contrary to Section 32 of the SRC on the “Prohibition on Use of Unregistered Exchange.”

Nevertheless, its investors usually use the social media websites in selling their TBCoins for a lesser amount due to lack of trading options which led TBC to organize online merchant stores and other entities that accepts TBCoins as a mode of payment for any transactions.

Thus, the public is advised NOT TO INVEST or STOP INVESTING in any scheme offered by any entities operating under THE BILLION COIN and KRIS KRINGLE or such other entities engaged in similar activities or initial coin offerings and digital asset trading which are not compliant with the BSP and the Commission.

The public must be wary that any promise of ridiculous rates of return with little or no risks is an indication of a Ponzi Scheme where monies from new investors are used in paying fake “profits” to earlier investors. Also, any promise that defies the normal financial logic is surely unreliable and sketchy.

It must be clear that entities engaged in such activities likely tend to disappear shortly to the prejudice of their stakeholders.

Consequently, the Commission encourages the public to be prudent in making or placing their monies on these entities especially during this pandemic.

Violators are warned that aside from the strict penalties imposed by the Commission for violations of the Securities Regulation Code, the Revised Corporation Code, and such other rules and regulation it enforces, the Bayanihan to Heal as One Act (Republic Act No. 11469) also punishes those participating in cyber incidents that make use or take advantage of the current crisis situation to prey on the public through scams, phishing, fraudulent emails, or other similar acts.

Further, those who invite or recruit others to join or invest in such venture or offer investment contracts or securities to the public may incur criminally liability, or otherwise be sanctioned or penalized accordingly as held by the Supreme Court in the case of SEC vs. Oudine Santos (G.R. No. 195542, 19 March 2014).

Should you have any information regarding any investment solicitation activity by any individual or group of individuals representing any entities operating under THE BILLION COIN and KRIS KRINGLE, please send your report to the EIPD at epd@sec.gov.ph.