The Securities and Exchange Commission (SEC) has recently issued an advisory (as seen below) on WON PROJECT or WONCOIN, warning the public of the individuals and groups involved in such activities. The advisory defines the activities behind the scheme, and advises the public to not to invest or stop investing in any investment scheme offered by the said entity, its representatives or any entities engaged in schemes which promises ridiculous rates of return with little or no risks.

Based on the information gathered by the Commission, the entities operating under the name WON PROJECT, WON NETWORK, and WON FOUNDATION (WON PROJECT), the developer of WONCOIN, are engaged in investment-taking activities in the Philippines which are NOT AUTHORIZED by the Commission.

WON PROJECT and its WONCOIN claims that it is based and developed in Singapore where it asserts that it has a virtual office but apparently, its main team and management composed of Jay Mark Abenir, Mhedel Ponce, Jhomar S. Montoya, and Jiaxuan Hoan, its Singaporean advisor, operates here in the
Philippines.

While WON PROJECT avers that its main projects are its mobile application and Multi-level Marketing (MLM) platform which aim to tokenize OFW remittances, online payments, digital-loading services, air ticketing, and travel and tours, its present endeavors rather suggest that its primary scheme or objective is generally to sell and trade it’s so-called “WONCOIN” to the public.

Seemingly, WONCOIN is a new type of cryptocurrency being developed by WON PROJECT whose value appears to increase rapidly due to its limited supply.

Thus, to proliferate its investment-taking activities and to lure the public in buying these WONCOINs, WON PROJECT utilizes the social media webpages and other platforms in order to advertise its schemes and endorsements and uses the domain “www.wonproject.co” in transacting investments from the public.

As posted online, WON PROJECT offers a number of investment packages ranging from One Hundred to Twenty Thousand US Dollars ($100.00-$20,000.00) with matching referral and other bonuses. To wit: 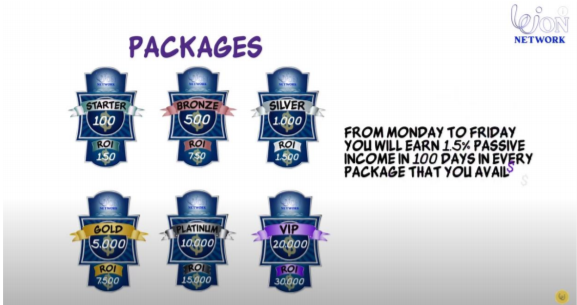 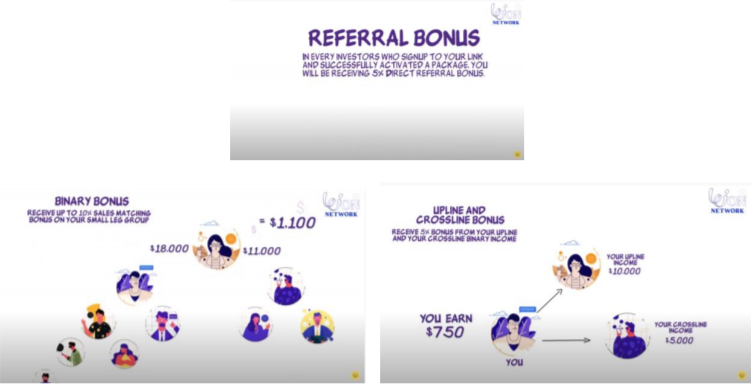 Based on the foregoing, WON PROJECT promises a daily profit of One and a Half Percent (1.5%) during weekdays for a period of One hundred (100) days or a total of One Hundred Fifty Percent (150%) return.

Investors will earn commissions as well from purchases made by their referrals and shall generate points accordingly based on the number of WONCOINs they purchased which in return, can be converted or be traded to cash bonuses including incentives such as an expensive android phone, Ipad Pro, sedan, SUV, or a local or international travel.

Moreover, WON PROJECT took advantage of the current crisis when it offered a promo that gives additional Fifty Percent (50%) Bonus on WONCOIN purchases during this Covid19 Pandemic for the purpose of enticing more investors to join its system and to possibly earn while being quarantined. As publicized:

In spite of its lucrative offers and promises with little or no risk which is already a red flag, WON PROJECT also imposes a daily cap or safety net which tends to limit the potential income of its investors.

Notably, the use of said mechanisms are indications of a possible Ponzi Scheme because such methods are frequently employed by scammers in their operations in order to generate and to secure funds from their new investors which shall then be paid as “fake profits” to their earlier investors so that it will appear that their ventures or investment packages are legitimate.

Further, it must be emphasized that WON PROJECT is deemed engaged in offering and selling of securities, in the form of an investment contract, to the public through the offer and sale of usual compensation packages that promises passive income to its investors and by “crowdselling” of its WONCOIN which is a form of “derivative” because seemingly, the constant rise of its value relies on the underlying assets or funds gathered by WON PROJECT from its investors in support of its venture.

This is in consonance with the SEC ADVISORY on Initial Coin Offerings and Virtual Currency posted 08 January 2018 which provides that some virtual currencies, based on the facts and circumstances surrounding their issuance, follow the nature of a security as defined by Section 3.1 of the Securities Regulation Code (SRC).

Briefly, a Crowdsale is an act of selling “tokens,” which are the intrinsic components of a cryptocurrency, in order to raise funds in lieu of rewards and equity in support of a company’s current cryptocurrency project on the premise that the value of the said digital asset will increase once established.

With regard to Derivatives, these are securities that derive their value from an underlying asset, benchmark, and/or certain conditions.

Necessarily, these securities must be duly registered with the Commission and that any person or entity intending to offer and sell such securities are required to secure the necessary registration and/or license as well.

However, per our record, WON PROJECT and its WONCOIN are NOT REGISTERED with the Commission and OPERATES WITHOUT THE NECESSARY LICENSE AND/OR AUTHORITY to solicit, accept or take investments/placements from the public nor to issue investment contracts and other forms of securities defined under Section 3 of the Securities Regulation Code (SRC).

Similarly, their names DO NOT APPEAR among the registered banks, exchanges or companies engaged in digital assets with the Bangko Sentral ng Pilipinas (BSP) as well in accordance with the GUIDELINES FOR VIRTUAL CURRENCY EXCHANGES (BSP CIRCULAR NO. 944) which requires all entities engaged in Virtual Currencies in the Philippines to obtain a Certificate of Registration to operate as remittance and transfer company pursuant to the BSP rules and regulations.

Therefore, the public is advised NOT TO BUY WONCOIN and NOT TO INVEST or STOP INVESTING in any scheme offered by WON PROJECT or such other entities engaged in cryptocurrencies and digital asset trading that are not registered with the Commission and the BSP.\

The Commission already stressed in its earlier Advisories that cryptocurrencies are very volatile and the process of digital asset trading is highly speculative and involves a higher degree of risk. Hence, any dubious promise of definite returns similar to WON PROJECT and its WONCOIN is truly unreliable because such scheme is too good to be true and entities offering the same are mostly engaged in Ponzi Schemes and are usually short-lived.

Thus, the public must be cautious and prudent in making or placing monies on their schemes. Nonetheless, the Commission will continuously monitor and oversee these entities and their activities in a way that it sees as proper in order to protect the investing public.

Consequently, the Commission warns all unscrupulous individuals and/or
entities that strict penalties are imposed for violations of the Securities Regulation Code, the Revised Corporation Code, and such other rules and regulation it enforces.

Apart thereof, the Bayanihan to Heal as One Act (Republic Act No. 11469) also punishes those participating in cyber incidents that make use or take advantage of the current crisis situation to prey on the public through scams, phishing, fraudulent emails, or other similar acts.

In the same manner, those who invite or recruit others to join or invest in such venture or offer investment contracts or securities to the public like Abigael Villafuerte, Jin Alba, Edwin Pantas, Lilibeth Arzadon, and Bobby Alvarez of WON PROJECT, may incur criminally liability, or otherwise be sanctioned or penalized accordingly as held by the Supreme Court in the case of SEC vs. Oudine Santos (G.R. No. 195542, 19 March 2014).

Should you have any information regarding any investment solicitation activity by any individual or group of individuals representing WON PROJECT and its WONCOIN, please send your report to the EIPD at epd@sec.gov.ph.