The Securities and Exchange Commission (SEC) has recently issued an advisory (as seen below) on NEWMONT PHILIPPINES, warning the public of the individuals and groups involved in such activities. The advisory defines the activities behind the scheme, and advises the public to not to invest or stop investing in any investment scheme offered by the said entity, its representatives or any entities engaged in schemes which promises ridiculous rates of return with little or no risks.

The Commission has gathered information regarding the alleged investment taking activities and operations of an entity named NEWMONT PHILIPPINES.

Based on the information and reports from the public, NEWMONT PHILIPPINES claims to be engaged in the mining industry and manufacturing of heavy equipment. It further avers that all of its businesses are outside of the Philippines contrary to our findings.

Apparently, NEWMONT PHILIPPINES lures the public to invest in their scheme through referral system designed to encourage its members to recruit others as well in its system in order to earn income.

Thus, the scheme of NEWMONT PHILIPPINES is to entice the public to invest in its NEWMONT COMPENSATION PLAN where it emphasizes that an investor can earn in three (3) ways, to wit:

Capital return will be released simultaneously with the last payout directly to the investors designated mode of payout.

2. Ten percent (10%) DIRECT REFERRAL BONUS (Optional);
3. Two percent (2%) shares of the OVERALL SALES INCOME FROM DOWNLINE.
Group sales bonus will be awarded on every 25th of the month. 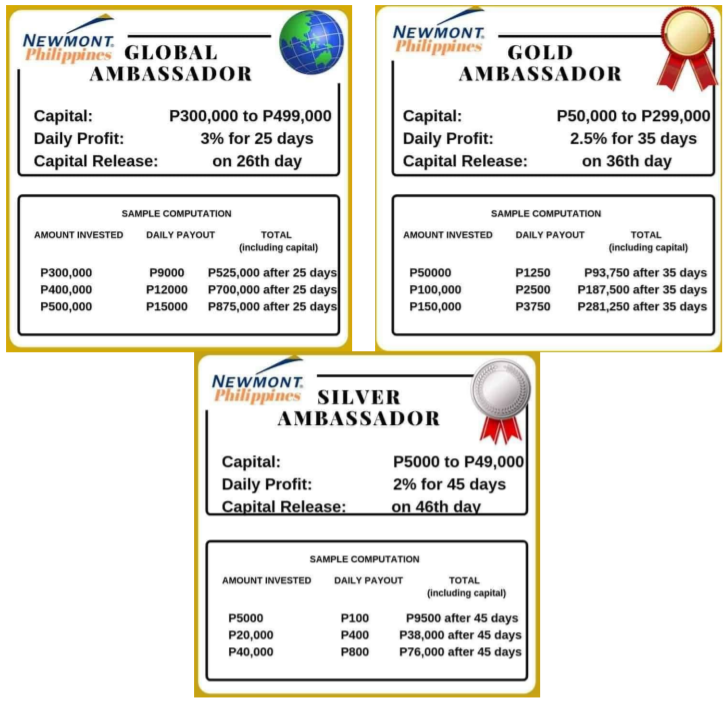 However, per record of the Commission NEWMONT PHILIPPINES is NOT REGISTERED either as a corporation or partnership. Further, it is NOT authorized to solicit investments from the public since it has not secured prior registration and/or license from the Commission as prescribed under Sections 8 and 28 of the Securities Regulation Code.

The public must be wary that any promise of ridiculous rates of return with little or no risks is an indication of a Ponzi Scheme where monies from new investors are used in paying fake “profits” to earlier investors. Also, any promise that defies the normal financial logic is surely unreliable and sketchy.

It must be clear that entities engaged in such activities likely tend to disappear shortly to the prejudice of their stakeholders.

Consequently, the Commission encourages the public to be prudent in making or placing their monies on these entities especially during this pandemic.

Violators are warned that aside from the strict penalties imposed by the Commission for violations of the Securities Regulation Code, the Revised Corporation Code, and such other rules and regulations it enforces, the Bayanihan to Heal as One Act (Republic Act No. 11469) also punishes those participating in cyber incidents that make use or take advantage of the current crisis situation to prey on the public through scams, phishing, fraudulent emails, or other similar acts.

Hence, those who act as salesmen, brokers, dealers or agents or claim to act as such for NEWMONT PHILIPPINES in selling or convincing people to invest in the investment scheme being offered by said entity including solicitations and recruitment through the internet may be prosecuted and held criminally liable under Section 28 of the SRC and penalized with a maximum fine of Five Million pesos (P5,000,000.00) or penalty of Twenty-one (21) years of imprisonment or both pursuant to Section 73 of the SRC.

Also, those who invite or recruit others to join or invest in such venture or offer investment contracts or securities to the public may incur criminally liability, or otherwise be sanctioned or penalized accordingly as held by the Supreme Court in the case of Securities and Exchange Commission vs. Oudine Santos (G.R. No. 195542, 19 March 2014).

Furthermore, the names of all those involved will be reported to the Bureau of Internal Revenue (BIR) so that the appropriate penalties and/or taxes be correspondingly assessed.

Should you have any information regarding any investment solicitation by any individuals or group of individuals representing NEWMONT PHILIPPINES, you can send your report to the EIPD at epd@sec.gov.ph