The Securities and Exchange Commission (SEC) has recently issued an advisory (as seen below) on NEXUS P CAPITAL, warning the public of the individuals and groups involved in such activities. The advisory defines the activities behind the scheme, and advises the public to not to invest or stop investing in any investment scheme offered by the said entity, its representatives or any entities engaged in schemes which promises ridiculous rates of return with little or no risks.

Based on the information gathered by the Commission, the entity operating under the name NEXUS P CAPITAL by GK MARKETING LIMITED, a company incorporated under the laws and regulations of the Marshall Islands, U.S.A., is engaged in investment-taking activities in the Philippines which is NOT
AUTHORIZED by the Commission.

NEXUS P CAPITAL promotes its scheme through endorsements on the internet and transacts investments and other related activities with the public using the domain “www.nexuspcapital.com.”

As posted online, NEXUS P CAPITAL offers a number of account types and credit token schemes with corresponding trading benefits that promise lucrative return of investments through the use of its unique web-based cryptocurrency and forex trading platforms provided by SIRIX. To wit: 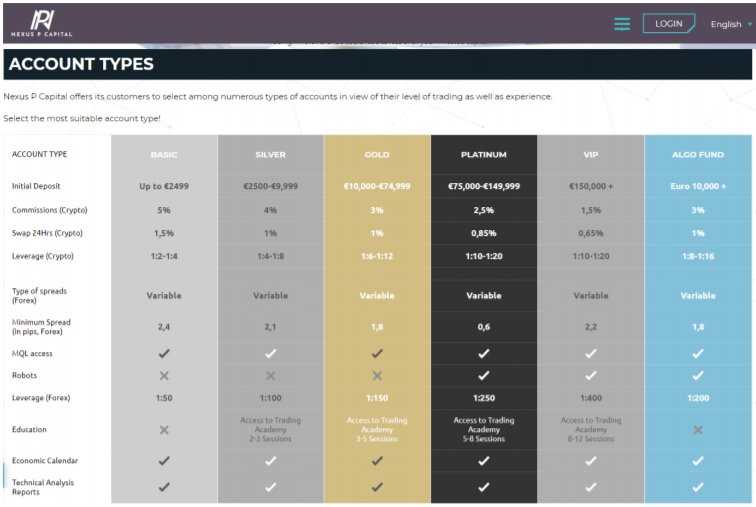 NEXUS P CAPITAL asserts that its online trading platforms are tailored to minimize the chances of an unsuccessful trade and with the given leverage ratio of 1:2 to 1:20 for cryptocurrency trading and 1:100 to 1:400 for forex trading depending on the chosen package, investors can expect large gains from the minimal investments they deposited in their margin accounts with the company.

Such leverage offered by NEXUS P CAPITAL significantly boost the trading capacity of its investors and magnifies their profits by up to Twenty times (20X) on cryptocurrency trading and Four Hundred Times (400X) on forex trading.

It must be emphasized that a Leverage System is a powerful tool for investors because it increases their trading capacity or exposure to any underlying asset without tying most of their capital.

Essentially, the investor is only paying or putting down a fraction of the value necessary for the trade or transaction and the rest of the amount is provided or loaned by his broker or agent subject to certain fees and/or commissions.

However, as previously stated in the SEC ADVISORY on Cyptec dated 06 April 2020, companies also use the concept of Leverage System as an investment strategy to finance their assets, business operations and other ventures.

Moreover, NEXUS P CAPITAL also uses the Trading Bonus System in its credit token scheme similar to Cyptec which tends to prevent its investors from withdrawing their investments until they comply with its minimum trade volume requirement and in case of non-fulfillment, the investors’ credit tokens will be forfeited by the company and any losses incurred by the investors will be deducted from their deposited or invested funds subject to Twenty Percent (20%) withdrawal fees.

Likewise, its agents and representatives will regularly persuade its investors to invest more monies in lieu of higher returns on deals that sound too good to be true.

In addition, NEXUS P CAPITAL also employs policies and agreements that entails unclear and confusing language or jargon designed to confuse investors regarding its actual scheme.

As such, most of its investors suffer losses rather than gains due to the business methods or mechanisms it employed which show indications of a Ponzi Scheme.

Hence, aside from these red flags, it can also be gleamed from above that the scheme of NEXUS P CAPITAL involves the offering and sale of securities, in the form of investment contracts, to the public which relatively promises steep passive income for monies placed on its compensation packages.

Therefore, NEXUS P CAPITAL and/or its agents are required to have appropriate registration and/or license to sell such securities to the public and such offer and sale of securities must be duly registered with the Commission as well.

However, per record of the Commission, NEXUS P CAPITAL and its operator, GK MARKETING LIMITED are NOT REGISTERED as a corporation or partnership with the Commission and have NO SECONDARY LICENSE to solicit, accept or take investments/placements from the public nor to issue investment
contracts and other forms of securities defined under Section 3 of the Securities Regulation Code (SRC).

NEXUS P CAPITAL and GK MARKETING LIMITED are also managing their own digital exchange platform without proper registration accordance with Section 32 of the SRC on the “Prohibition on Use of Unregistered Exchange.”

Seemingly, the names NEXUS P CAPITAL and GK MARKETING LIMITED DO NOT APPEAR among the registered banks, exchanges or companies engaged in digital assets with the Bangko Sentral ng Pilipinas (BSP) as well in accordance with the GUIDELINES FOR VIRTUAL CURRENCY EXCHANGES (BSP CIRCULAR
NO. 944) which requires all entities engaged in Virtual Currencies in the Philippines to obtain a Certificate of Registration to operate as remittance and transfer company pursuant to the BSP rules and regulations.

Considerately, the public is advised NOT TO INVEST or STOP INVESTING in any scheme offered by NEXUS P CAPITAL and GK MARKETING LIMITED or such other entities engaged in digital asset and forex trading which are not registered with the BSP and the Commission.

The public must be aware that the process of trading is highly speculative and involves a high degree of risk, hence, any dubious promise of definite returns is truly unreliable. Thus, the public must refrain from investing on persons and/or entities engaged such Ponzi Schemes which promise ridiculous rates of return with little or no risks.

As previously stated in the earlier Advisories of the Commission, entities engaged in activities that defies the normal financial logic or offers “to good to be true” investment packages or plans tends to disappear shortly after amassing funds from the public.

Accordingly, the Commission is constantly monitoring and overseeing the matter in a way that it sees as proper as always in order to ensure the stability of our financial sector and to protect the investing public.

Consequently, the Commission encourages the public to be prudent in making or placing their monies on persons and/or entities engaged in investment-taking operations.

Further, as a warning to unscrupulous individuals or entities that may take advantage of our current crisis, they are informed that aside from the strict penalties imposed by the Commission for violations of the Securities Regulation Code, the Revised Corporation Code, and such other rules and regulation it enforces, the Bayanihan to Heal as One Act (Republic Act No. 11469) also punishes those participating in cyber incidents that make use or take advantage of the current crisis situation to prey on the public through scams, phishing, fraudulent emails, or other similar acts.

In the same manner, those who invite or recruit others to join or invest in such venture or offer investment contracts or securities to the public may incur criminally liability, or otherwise be sanctioned or penalized accordingly as held by the Supreme Court in the case of SEC vs. Oudine Santos (G.R. No. 195542, 19 March 2014).

Should you have any information regarding any investment solicitation activity by any individual or group of individuals representing any entities operating under NEXUS P CAPITAL and GK MARKETING LIMITED, please send your report to theEIPD at epd@sec.gov.ph.